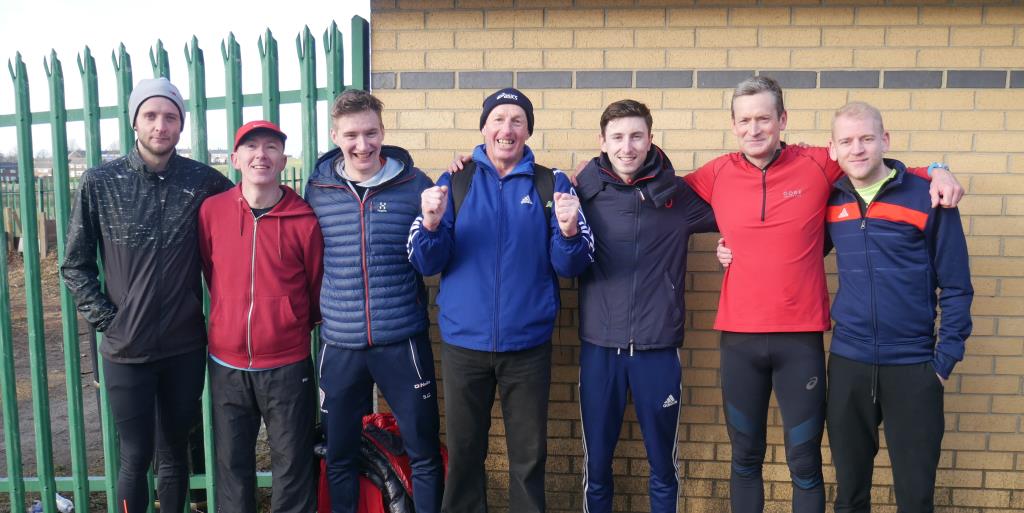 New Markse Harriers enjoyed medal success at the North Eastern Counties Road Relays at the weekend.  Held at Hetton Lyons Country Park, New Marske were up against the top clubs and runners in the North East.  With a mix of 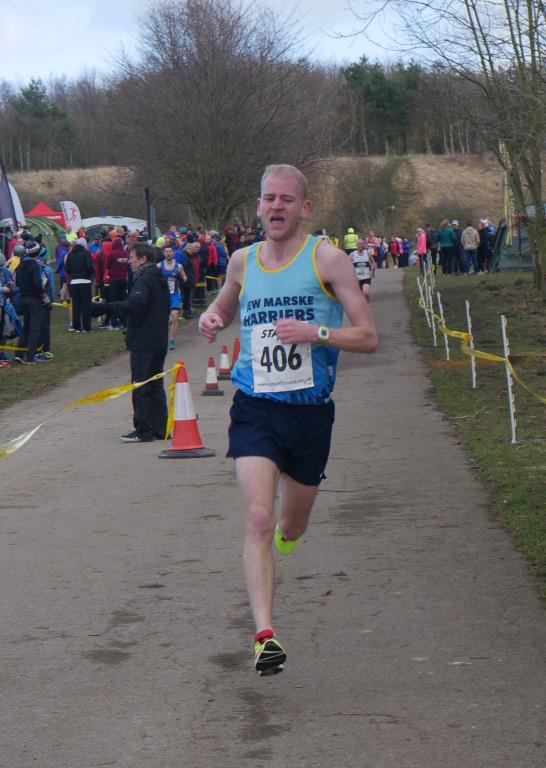 young and veteran runners New Marske were bookended by the two fastest runs of the day.  Dominic Shaw, fastest in 10.39 over the 2.2 mile course, lead after the first leg. Lewis Gamble-Thompson, taking over in 5th place for the final leg, stormed through the field in a time of 10:48 to move up to 3rd place and claim the bronze medal for the team.  They were ably supported by Sam Garrett 11:56, Dean Newton 11:24, Andrew Pearson 12:20 and Martin Murray 12:47.

New Marskes Veteran Ladies team were edged out to 4th place with the big clubs from Gateshead and Sunderland fielding strong teams including GB International Aly Dixon who set the fastest ladies time of the day in 11:53. Considering this category is for over 35’s, New Marskes team including two over 50’s did exceptionally well to finish 4th with good runs from Sharon Bulman 13:35, Trish Speedie 14:55, Kath Aspin 14:32 and Kay Neesam 14:01. 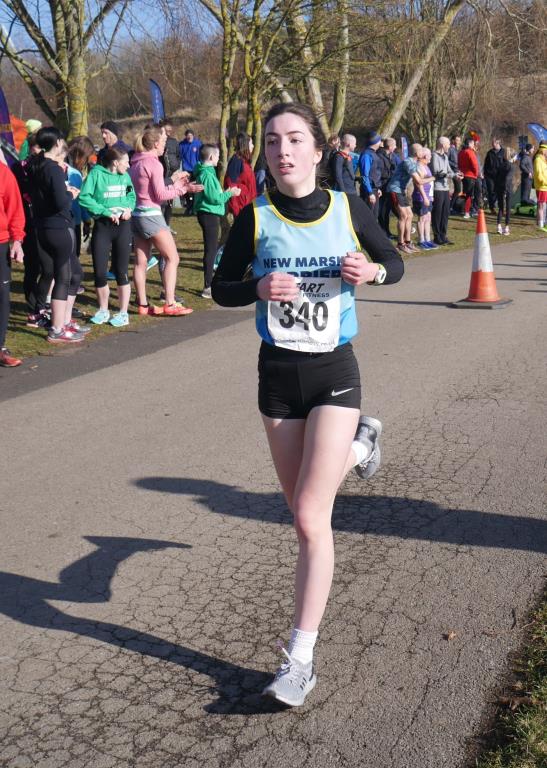 the team to 3rd on the first leg.  Eli was supported by Molly Shaw 13:44, Charlotte Bennett making her senior debut 14:41 and Charlotte Ellis guided by David Aspin also getting a course PB in 14:54.

Many Thanks to everybody who supported the event, a great team atmosphere. 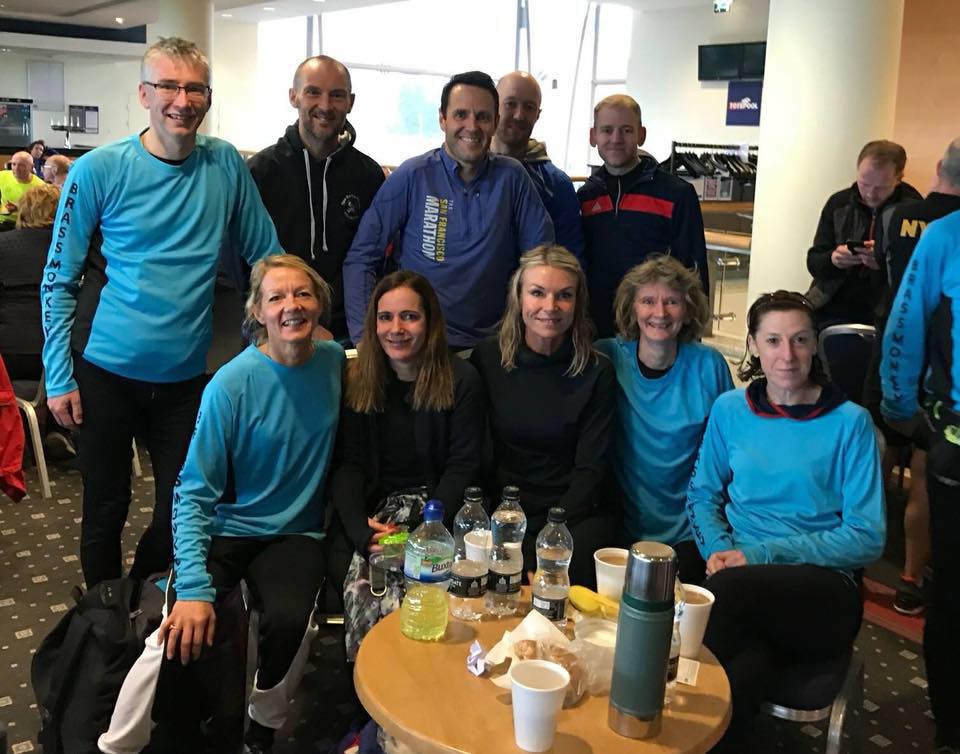 Another sell out race at the 2018 Brass Monkey Half Marathon.  The runners were greeted with almost perfect running conditions given the time of year, with just a slight headwind going out.  Lewis Gamble-Thompson was upfront from the start coming home in a great 4th place with a PB and his 1st sub 70 Half Marathon.  New Marske Ladies were just edged out for the ladies team prize but Kay, Sharon and Kath all picked up place prizes.  Ronnie was 1st 75+ home.  Plenty of PB's and hopefully the start of another great running year. 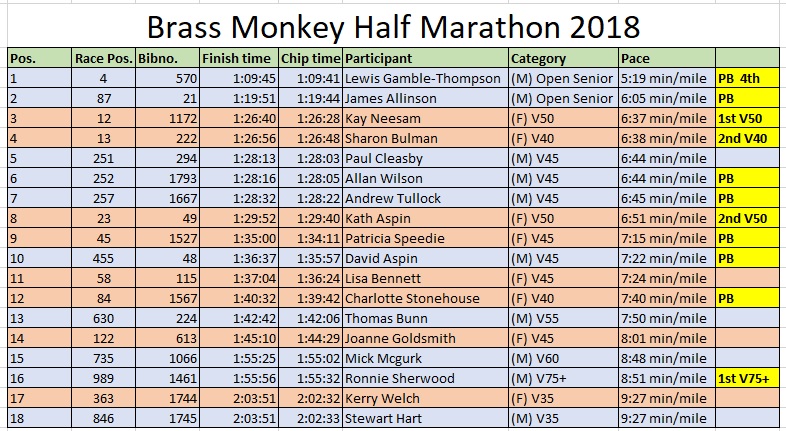 The Senior Christmas Handicap will be based on the Redcar parkrun on 30th December and the Junior Handicaps at Redcar Junior parkrun on 31st December. Should either of these events be cancelled then the next relevant parkrun to take place will be substituted.

To take part, members must be registered with parkrun and take their barcode to the parkrun as normal (no barcode, no time and no handicap!!). You run the parkrun event in the usual way adhering to parkrun rules and once the results have been published the time in the tables below are subtracted from the actual published times to give a net time - the runner with fastest net time will be the winner. Trophies will be presented at the presentation night in April. Anyone missed from tables below that wishes to take part please email This email address is being protected from spambots. You need JavaScript enabled to view it. by 29th December with details. 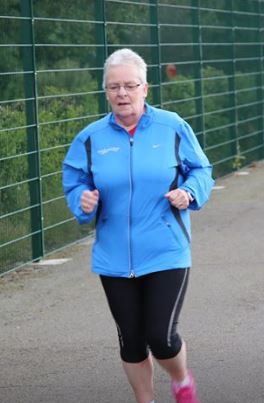 Junior (2k) There are two junior trophies: one for Minnows members and one for Junior Members (upto 14 years old on the day) 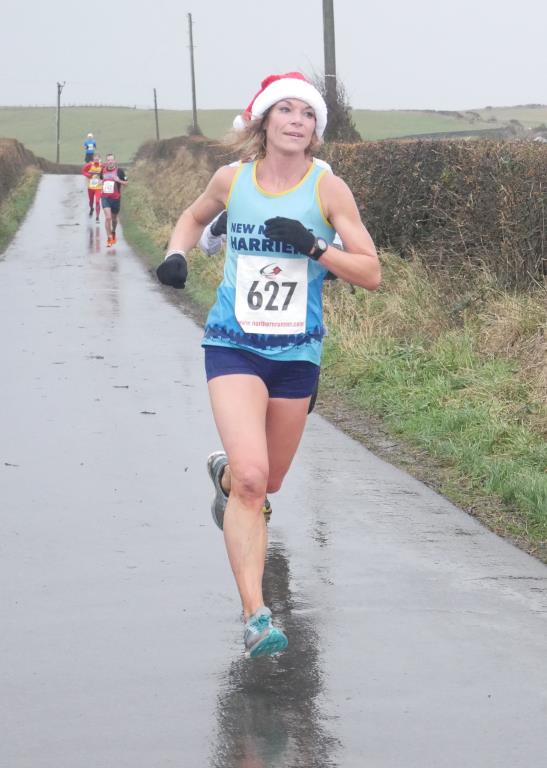 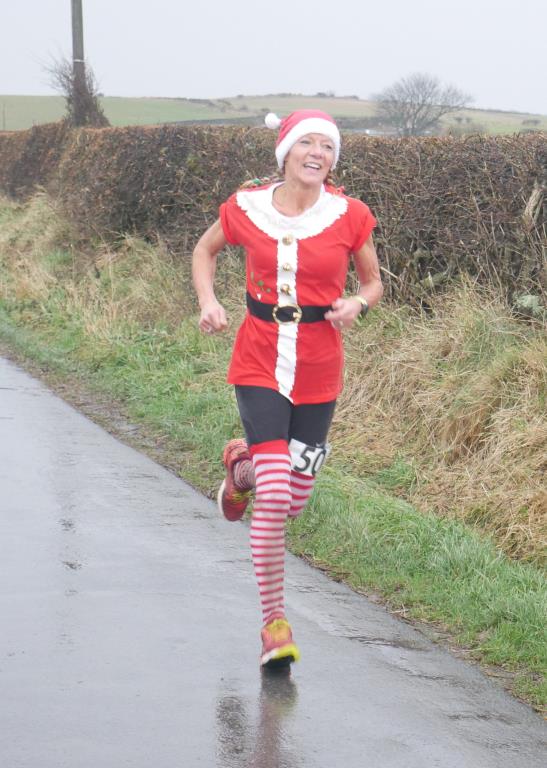 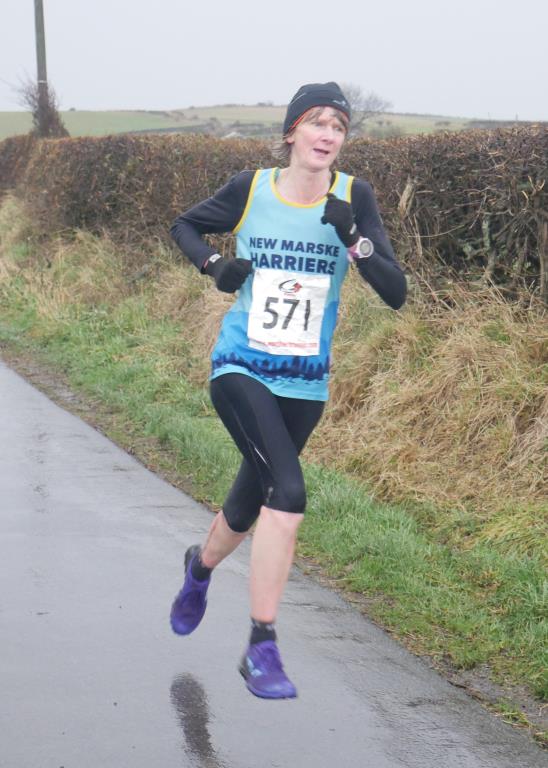 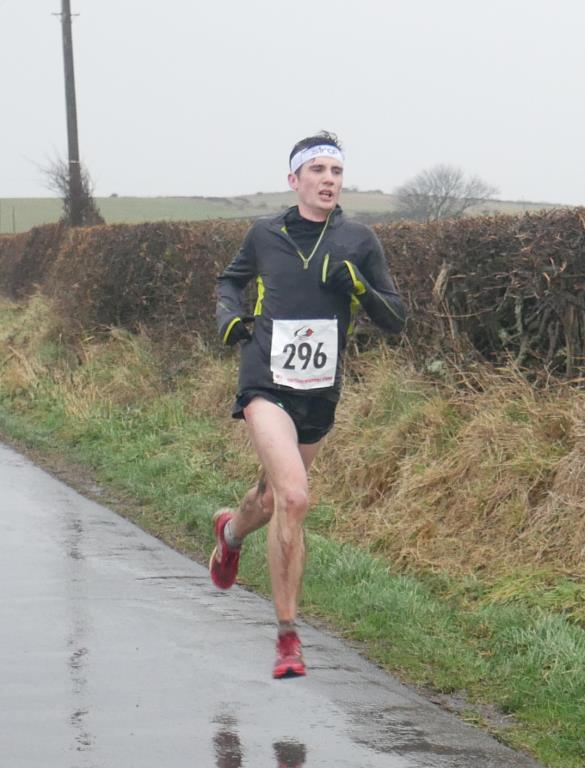 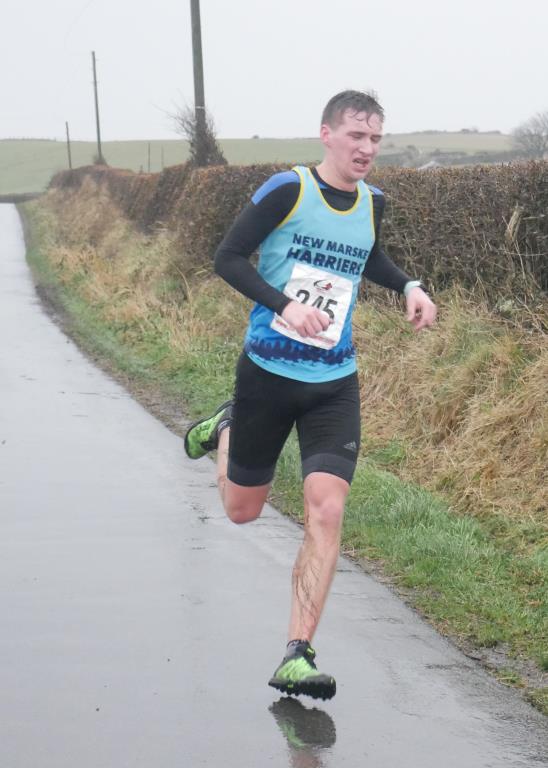 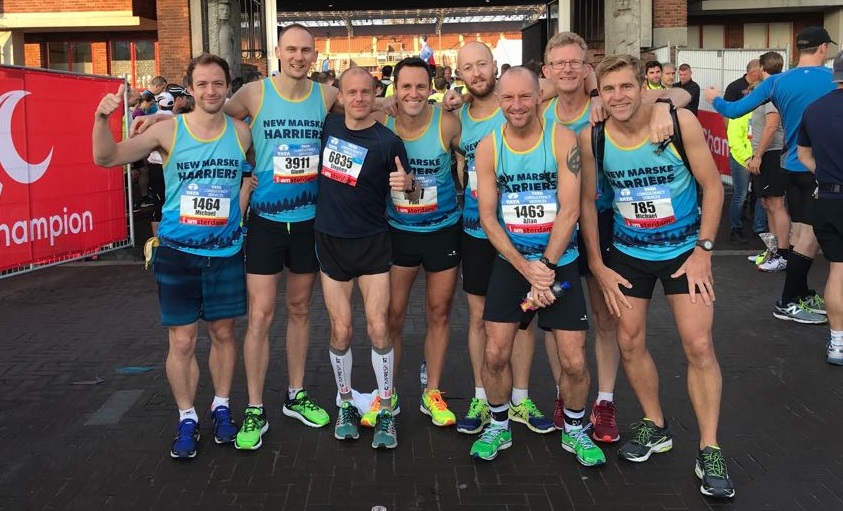 In about 2014, a group of New Marske Harriers began training together for a Spring marathon, perhaps inspired by my incessant raving about the attraction of the marathon or perhaps inspired by the thoughts of, ‘If he can do it [Sub 3] anyone can,’ Whatever the drive, the group developed.

Conscientious training for the first year led to some spectacular results that have, on the whole, been improved year by year. From the training group, 5 out of 7 achieved that club runner’s holy grail of the sub 3 hour marathon.

The elder statesman of the group – supreme focus for his debut marathon at Manchester in 2015 led to a 2:57 finish only to be robbed by a short course measurement scandal. Had someone bothered to add the extra bit onto the course, Neil would still have finished well under the 3-hour mark.

A revisit to the same marathon in subsequent years, adopting a more relaxed approach to training and pre-marathon build up, led to less speedier marathons and his entry being recorded as Neil Wagner –an error he was happy to live with as the wheels fell off well before 20 miles. From the debris of that marathon the ‘Wagner Striders’ relay team name was born.

The most enthusiastic member of the group, Allan is always in possession of a training plan he then ritually ignores by smashing out every session faster than he needs to. When it comes to racing though, luck deserts him. Arriving late for York 2016 resulted in a DNS (did not start) forcing a late entry to a cobbled together Morpeth to Newcastle Marathon 2016 (now defunct). Training for Amsterdam had been less problematic but contracting shingles two weeks before the run put paid to yet another genuine race attempt.

If we were the A–team – Mike’s good looks would certainly have him cast as ‘The Face’. Mike had completed one marathon previously and remained scarred by a four hour plus finish at Chicago in 2005, back in the dark ages before training for a marathon was believed to be a good idea. Mike decided never to do another marathon again. He was happy to do the training with the group but resisted the peer pressure to have another crack. Thus all his training runs were run with a relaxed and smooth style giving him the title of “The white Kipchoge”

Glenn’s job takes him off shore and to the envy of those of us with puny arms – Glenn has the motivation and self discipline to keep himself in tip top physical shape, even to the extent of doing his long runs in isolation on an oil rig treadmill.  A debut Marathon in 2015 of 3:02 on the Manchester short course was quickly put to bed smashing a speedier 2:55 in London in 2016, which he further improved in 2017 with a 2:54.

Another novice marathoner in the group, Michael has a background in cycling and possesses calves that have no right being seen on any human distance runner, being much more suited to hill climbing cyclists. Michael did his debut marathon in 2016 at a trail event in Ambleside. Underwhelmed by his performance in that hilly race, he struck lucky in the London ballot for 2017 and smashed a debut road marathon time of 2:59. Rather than doing summersaults with his time he described it as ‘alright’- a harsh critic!

James is the fastest marathoner of the group. Debuting in Manchester 2015 with a 2:59 on the short course, he bettered that the following year at London running 2:55 and the last 6 miles with a pulled calf muscle. Still feeling he’d not done his talent justice, he improved yet again in 2017 running a comfortable 2:50 with room still for more to come. The only thing James does faster than running is drinking.

Married to our very own Cheryl Hepples, Stephen was the least experienced marathoner in his family having run zero previous marathons compared to Cheryl’s running total of three! For those of you who don’t know Stephen, he has a very specialist set of skills. A member of Newham and Essex Beagles, Stephen has a 1500m pb of 3mins 46 seconds, a 5km pb of 14:37 and a half marathon pb of 64 minutes. He is currently enjoying a break/retirement (delete as appropriate Ste!) from competitive racing. When asked about his current level of fitness Stephen always responds with – ‘just ticking over’ (a bit like a Rolls Royce engine!)

My marathon debut was at Edinburgh 2010, finishing with a time of 3:49, followed by multiple marathons nearly every year thereafter, culminating in a pb at Berlin 2016 of 2:55. A veteran of many a foreign marathon, Amsterdam was marathon number 21 for me.